Mistress Milana and her friends Amina and Christina wanted to try shit fetish. They had heard about it but they had never tried it. They watched videos of it today and they got this loser to come and eat their shit. They were lucky to find a loser who had a fetish for poo. He ate their shits and enjoyed licking their butts and their assholes. They also had fun with the scat vids experience.

Lady Luisa and her boyfriend had an argument. She knew she was right but her boyfriend thought he was right too. He went ahead and did what she had told him not to do and it backfired badly. It also cost a lot of money. She was so pissed that she took a shit on him and whipped him before she was able to calm down and agree to talk about the matter with a view to resolving it.

Mistresses shit on guy for undercutting their friend

Mistress Milana was pissed that this loser had tried to cut her out of a deal she initiated. She was pissed and could not believe that kind of betrayal. She pretended she was not aware of it and that she wanted to talk to him about a different matter. All this while she had invited her friends and when he showed up, they took turns feeding him shit and warned him not to try and undercut her.

Lady Yuna gets slave to eat her shit

Lady Yuna loves shitting. She is one of those mistresses who do not like to waste their shit by pooping in the toilet. She likes to make it useful by getting a slave or a loser to eat it. She, however, has to wait till a slave or loser has messed up for her to do it. That is what she did today as she forced this slave to eat her poo.

Mistress Anna did not have food in the house. Her slave was hungry and kept bothering her that he wanted to eat. She did not feel like going to buy food at that exact moment so she took a shit and she gave it to him as his food. He had no choice but to eat it and she made sure he licked every single piece of it. Then she went on doing what she was doing.

Mistress Lia is not a forgiving person. When she found out that her husband had cheated on her, she resorted to getting her revenge. She did not want to fuck someone else. Her revenge entailed doing something so crazy to him that he would never think of pissing her off again. So she took him to the bathroom and she took a shit on him. She smeared his face with her poo and she took photos.

Mistress Gaia felt like shitting on someone but she did not have anyone to shit on. So she went on the internet and she put an advert. She pledged to pay for anyone to eat her shit and she got a couple of offers. She settled on this guy and she gave him a call and gave him directions to her place where she had a great time shitting on him. 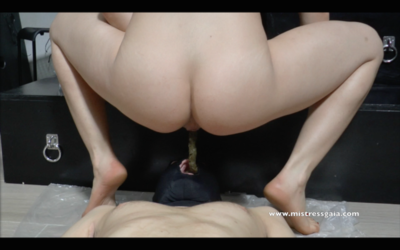 Mistress Milana was angry at this guy for not keeping his end of the bargain. She had kept hers and was massively disappointed when he did not. She could not let him get away with such kind of deception and she punished him cruelly. She used her shit to do it and by the end of it, he had eaten her shit and drank her pee. But more importantly, she knew he would never do it again.

Goddess Antonella had never tried shit fetish before. But she is a hot mistress and she could see that a lot of hot mistresses were able to get guys to eat their shit without any issues. So she tried it. She used her big round tits as well as her sexy and seductive moves to tease this guy and get him to eat her shit. She turned him on so much that he ate it without asking questions.