All articles tagged with "Mouth"

Mistress Gaia was pissed at her slave for what he had done. She had learned that he had been speaking ill of her behind her back and then acting all sweet with her. She had to teach him a lesson and she did it cruelly. She had him lick her asshole after he had eaten her shit. She also pissed on him and she also had him drink the pee.

Mistress Gaia's slave knew he had pissed her off. He tried to apologize to her by licking her boots, but she was so pissed she had to punish him with a worse punishment than what he was doing. She decided to use shit fetish to do it. She enjoyed shitting into his mouth and he had no option but to lick and swallow the shit. He never repeated the mistake.

This mistress believes that she knows best. Anyone who tries to contradict her has it coming. He or she is punished as cruelly as she wants and that is what happened to this loser today. She used her shit fetish to degrade and torture him. She made sure he learned his lesson as he ate and swallowed her shit. He thought he was dreaming as he had never expected something like that to be done to him.

Lady M was pressed. She felt like shitting. She had watched scat fetish videos and as she was pressed and felt like pooping, she remembered she wanted to try it. So she rushed to the bathroom and she took a dump in her bathtub. She did not worry much about it since she had a slave who would clean up after her. She had fun doing it and promised herself she would do it again.

Mistress Alina does not need any slave for her to enjoy her shit fetish. She is one of the few mistresses who genuinely have a fetish for shit. She can enjoy it perfectly on her own and not have to worry about anyone else. Today she pooped into a glass and pretended it was ice cream and she tried to get the shit back into her system but it was not easy.

This mistress likes good food. She appreciates good food. But the opposite is also true. She hates good food and anyone who gives her bad food will not like how she will react. She had asked this chef to cook a great meal for her but she realized he was not a qualified chef. He was lying to her and the meal was horrible. She punished him cruelly in the kitchen by shitting on him and forcing him to eat it.

Mistress pays another mistress to indulge in scat fetish

This mistress loves scat fetish but she can never bring herself to do it. That is why she likes paying another mistress to humiliate a slave for her while she watches and enjoys what happens. Today she recorded it on her phone as the mistress facesat on the slave and turned him into her human toilet. She shit on him and made him eat and swallow her shit, which he did.

POV from a Human Toilet

Check out this very unique view of what it's like to be a human toilet. This masked slave lies under this toilet seat while a scat queen sits on it and starts shitting. A long turd drops out of her asshole right into his mouth. He starts chewing but the scat comes so fast that he can't chew it fast enough. It fills his entire face and you have a front row seat.

Slave Acts as a Shitting Chair

Denise is trying to choose a new toilet slave so she has potential slaves come in so she can fill their mouth with scat and see how well they eat it. This guy is a good contender because he turns himself into a shitting chair. Denise sits down on his face with her asshole pressed against his mouth and unleashes huge turds into his mouth and he eats them right up. 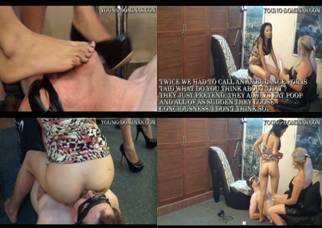